Down by the river

I confess I do not believe in time. I like to fold my magic carpet, after use,
in such a way as to superimpose one part of the pattern upon another.

The work of Barbara Tuck is the subject of Delirium Crossing, a publication and travelling exhibition, developed in partnership with Ramp Gallery Kirikiriroa Hamilton and Te Pātaka Toi Adam Art Gallery. The exhibition showed at both these galleries and its final Te Wai Pounamu exhibition will open at Christchurch Art Gallery Te Puna o Waiwhetū on 14 October 2022. While Delirium Crossing was in preparation, Tuck was at work on a new group of paintings. The earliest of these, Ngā Uruora, is part of Delirium Crossing. The subsequent paintings in the series make up this new exhibition, Down by the River.

The title Ngā Uruora circles back to a reference critical in Tuck’s late career ‘painted ecologies’ works which are brought together in Delirium Crossing. In these paintings Tuck taps unexpected perceptual and lyrical possibilities within the encumbered local discourse of landscape painting. Ngā Uruora is the Māori term for the lowland forests and swamps that were Aotearoa’s richest sites of biodiversity. Ecologist, Geoff Park, chose the term as title of his 1995 book that examines surviving remnants of Aotearoa’s pre-agricultural landscape. Reading Park’s book in the late 1990s was one of several influences that compelled Tuck to travel to the West Coast of Te Wai Pounamu. Her trip of 2005 proved formative, setting in motion an annual cycle of autumnal visits and a new pattern of working.

The twelve-year odyssey that nourished Tuck’s painting took in specific sites in this country, predominantly within Te Wai Pounamu, and within what she has described as the “mind boggling” centre of Australia. As the series unfurled, she partook of a geological and vegetative feast: Ancient kahikatea forests in fruit; Ice Age bog lakes; tarns and alpine meadows; limestone escarpments and caves; black waters; gorges; wetlands; braided rivers; seabed erosions and limestone pillars.

Plume of Steam, the last ‘painted ecologies’ works, revisit the site of the lost pink and white terraces of Rotomohana. After this encounter with Aotearoa’s C19th touristic wonderland Tuck’s pattern of annual expeditions and focus on the particularity of environments altered. Preoccupied by the embroilment of tourism and forced migration, she began to fashion a more inwardly-focused method.

The Down by the River paintings, like those of Bloom Bay (2018), The Undoing (2019) and Fever Lung (2021), were all made in one place; a red studio on a Helensville hillside overlooking a big sky and moving cloud array. As Tuck writes, “The Kaipara River delta is best at dusk when the patches of water glisten in western light. It’s an imaginative space for me, freighted with meanings. Its arbored past and uncertain future, a Chinese landscape at first light when it is shrouded in mist like an inundation of sea.”

Tuck paints within earshot of the buzzing bee garden she has cultivated: “At the best of times the garden is a haven of activity with bees, butterflies, and insects. I know the quail and pheasant visit at dusk and dawn.” As many have discovered during a pandemic, ‘staying put’ is conducive to different varieties of roaming. In Tuck’s case she has granted herself permission to range ever more vertiginously across time, space and painterly possibility.

Many frameworks for the paintings of Tuck are advanced in Delirium Crossing. Hanahiva Rose considers temporal scale: “There is the geological time of the mountains; the time it takes for water to travel from Aoraki to Korotuaheka; the period of human inhabitation of these landscapes — and the time before; the time during which no clouds pass the sky; the time it takes to paint a painting; the lifespan of a karearea. . .” Likewise for Rebecca Rice, “[Tuck’s] painting is as much about histories of time as it is about histories of place. It reminds us that colonial time — the time of Pākehā presence in Aotearoa — is something quite separate from, and rendered insignificant by, geological time, those natural processes that have shaped this place in all kinds of wondrous and uncontrollable ways.“

In contrast, Christina Barton sets her contemplation of Iris Gate — a work that is a complex hinge between Tuck’s shaped aluminium ‘template’ paintings of the 1990s and her small square, restlessly-rotated oil on board paintings of the 2000s — within the historical moment in which they were made: “Painters in the 1990s were working in the wake of powerful structuring narratives, beyond the avant-garde’s distrust of realism, past modernist formalism’s strictures, on the tail of postmodernism’s doubt, after paintings 1960s’ endgames and 1980s’ returns . . .The world was seeping back into picture making.”

Lachlan Taylor’s sense of art historical time is sweeping. He evokes a setting from antiquity; the imaginary pastoral region of Arcadia: “Where is Achilles? We’re trained not to fall for the tricks of a title, but Dipping Mortal is too seductive a lure. The Myrmidon must be hidden somewhere in the overlapping folds of Tuck’s jigsaw landscape. I’m guided by the reassurance that her painting has been a home for classical allusion before.” Meanwhile Nathan Pohio links Tuck’s, “kaleidoscopic crossfading of landscape in visual notations,” to the story of Kā Tiritiri o Te Moana, the first name for the Southern Alps. He takes us on a mythological West Coast journey in which Maui mistakes the alps for illusion: “The half human, half deity, Māui ventured southward in his waka. . . A member of his crew remarked on the line of white in the sky being a vast summit of mountain ranges, and although other crew members agreed, Maui himself replied ‘He Tiritiri o Te Moana’ — ‘it is only a mirage of the ocean.’”

While these loops across space and time were being envisaged by those writing for Delirium Crossing, Tuck was again at work on the Helensville hillside. The resulting Down by the River paintings somehow magically merge appreciation of water as a life force with consciousness of impending inundation. Tuck’s fascination with the waterfall connects her reading about Romantic poets’ enthusiasms for cascading water to her own earliest environmental encounters: “When I was a child, my father took me to Huka falls. That experience — the living force — made a huge impression on me. You feel the vibrations of the water bursting out of this narrow chasm.”

Waterfalls have figured in many Tuck works previously. The early Chinese presence in Central Otago is signalled in Fieldwork Central paintings like Wanton Eye by lavish blue and white China cascades. The waterfall is a leitmotif of the creative imagination, a phenomena beyond control, like that, “sudden efflorescence of a tree,” Susan Ballard describes in Tuck’s 2011 When the water came. This is a tree Tuck transplanted complete with birds from Bonaventura Berlinghieri’s St Francis Altarpiece of 1235 to Australia’s Uluru-Kata Tjuta National Park. Interestingly, Berlinghieri’s birds appear to have returned in Lichen and Moss from the current exhibition.

Mirages and sudden efflorescences are among many marvels that crop up in Delirium Crossing — Sarah Treadwell’s description of the topsy-turvy landform of Tuck’s Canterbury Upland is another: “The painted ground drops like a theatre curtain (heavy scalloped devices opening to a world of else-where).” The wonder of Tuck’s new paintings, however, may not be attributable to devices so much as the inescapable continuity of the picture plane — that quality of ‘everything happening at once,’ as noted by Hanahiva Rose. Inversions of various kinds also feel important. Emma Smith’s way into the logic of Ngā Uruora is via Uccello’s Hunt in the Forest (c. 1465-70). Smith writes, “The current of the painting is at odds with the fun of its tale. . . As in Tuck’s work the source of sustenance becomes collective dread.” A related point is made by Jan Bryant who describes Tuck as a practitioner of a particular form of recalibration, “discovering more joyful seams within widespread articulations of hopelessness.”

One of the aspirations of Delirium Crossing was to speculate on the role of painting in our times. This ambition was well supported by the long painting career of Barbara Tuck and the deft ways she has found to fold her magic carpet. 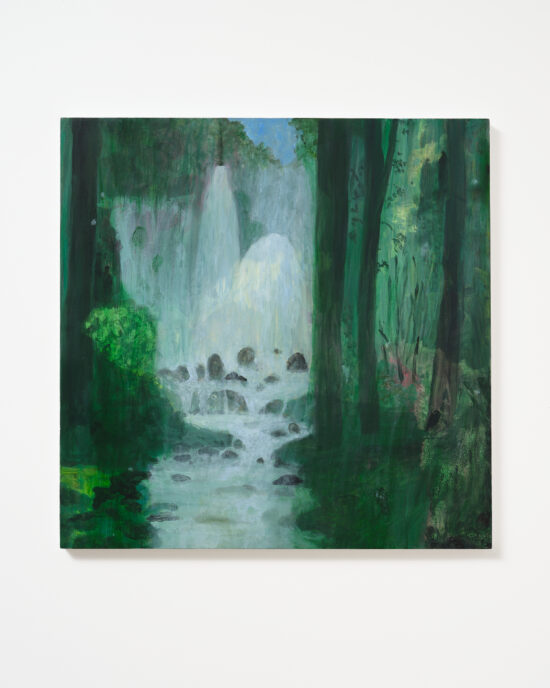 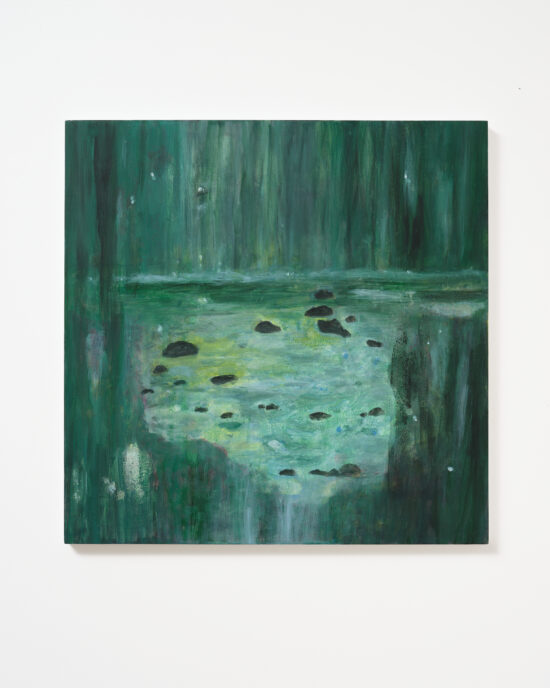 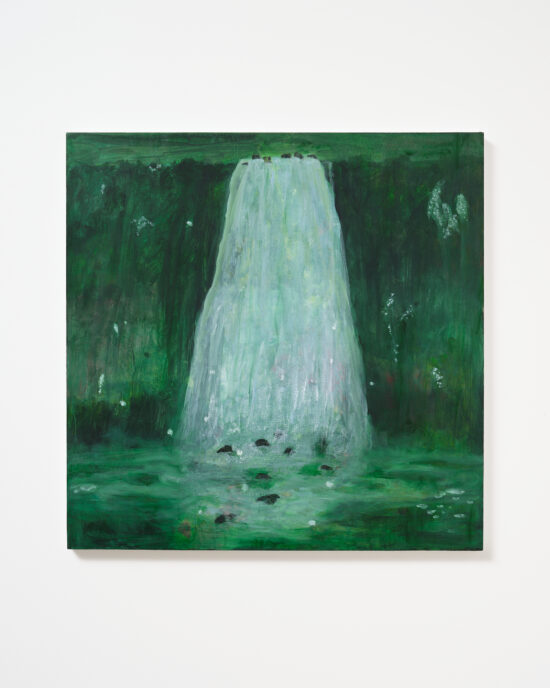